ALL DOGS ARE MORE THAN WELCOME

HOLIDAY COTTAGES BETWEEN THE MOUNTAINS AND THE COAST

NO EXTRA CHARGE FOR  PETS!

TREGARON AND THE AREA

Tan yr Allt is situated just off the very scenic Abergwesyn Mountain Road, renowned as a scenic and spectacular drive across the Cambrian Mountains. It was originally the first stage of the drovers’ route.

The Cambrian Mountains have been described as “one of the few remote areas in Southern Britain”, “wild open wilderness” and “the green desert of Wales”. There are only a few roads across the mountains, and they are some of the most beautiful drives in Britain. 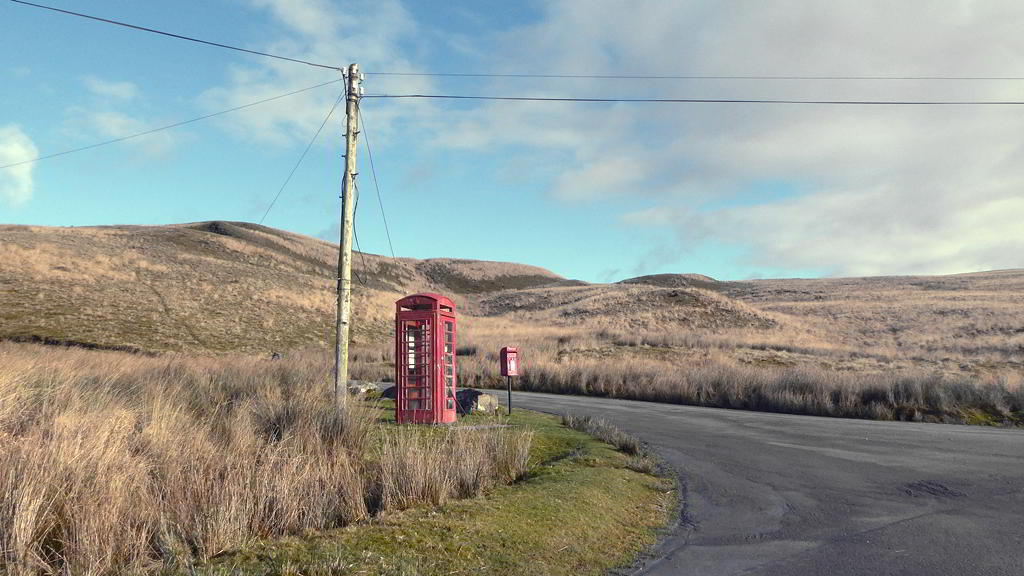 At Nantymaen is the remotest phone box in Wales,

on the Abergwesyn Road

The ancient market town of Tregaron is one mile away.  It was once a strategic point for drovers gathering livestock to take along ancient tracks across the mountains to the markets of London and south England.

The town has many amenities including cafés, a tea room, take-aways, an award-winning inn, and pubs/restaurants serving real ales and local ciders. 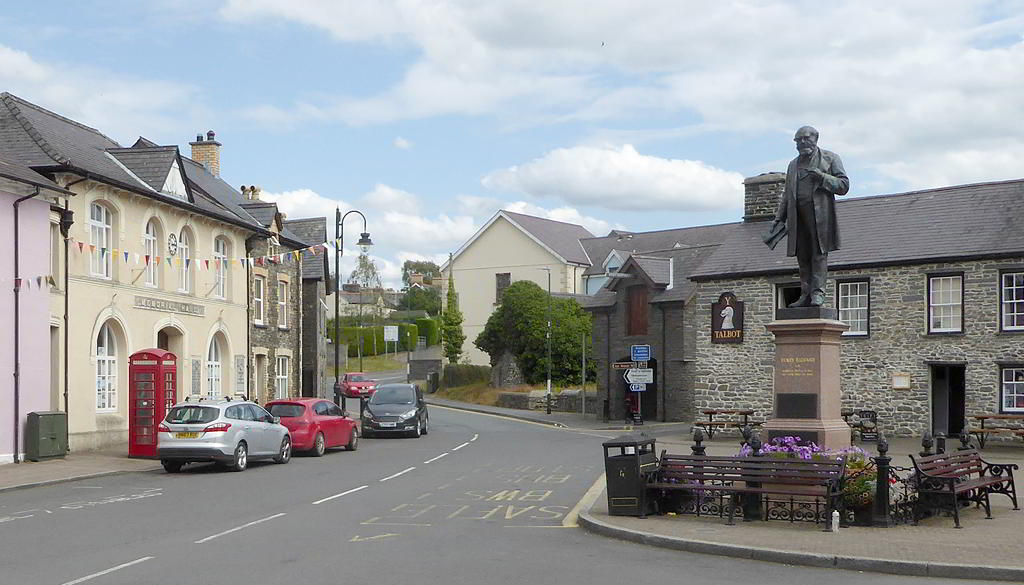 The statue of Henry Richard in Tregaron Market Square

The centre of Tregaron features a statue of Henry Richard, a Victorian-period minister and politician, born here in 1812 and best known as an advocate of peace and international arbitration.

Tregaron is also the home of the Welsh Gold Centre which sells handmade Celtic-inspired jewellery and houses art exhibitions.

Eisteddfodau - festivals of traditional Welsh music and poetry - have been conducted at Tregaron for a century or more. An annual eisteddfod is held in the town each September, drawing performers from all parts of Wales and beyond.

Tregaron is also a centre for ‘trotian’ - Welsh for horse trotting and harness racing - and the Tregaron Festival of Harness Racing each summer attracts competitors from all over the UK and Ireland.

Shops, pubs and restaurants are one mile from your door.

Tregaron Angling Association / Cymdeithas Pysgota Tregaron manages the very scenic Teifi Pools, home to wild brown trout, and 17 miles of the River Teifi, as well as remote wilderness fishing on the River Camddwr and Llyn Berwyn in the Cambrian Mountains. Day and weekly tickets are available.

Cilgwyn Golf Club nr Tregaron. This is a nine-hole course situated in a secluded picturesque valley, landscaped with trees, ponds and streams. It is situated near Llangybi, a village approximately 8 miles from Tan yr Allt. It also has a Bar and Restaurant.

Borth & Ynyslas Golf Club is reputedly the oldest course in Wales, established in 1885. It is a traditional links course, and most of the course is within the Dyfi National Nature Reserve, which was designated a UNESCO Biosphere Reserve in the 1970s. It is managed along with environment agencies for the fauna and unique habitat, and set in a spectacular location above Cardigan Bay. It has a Professional Shop, Bar and catering facilities, and is able to hire out golf clubs as well as buggies and electric trollies.

Red Kites & The Red Kite Centre and Museum in Tregaron 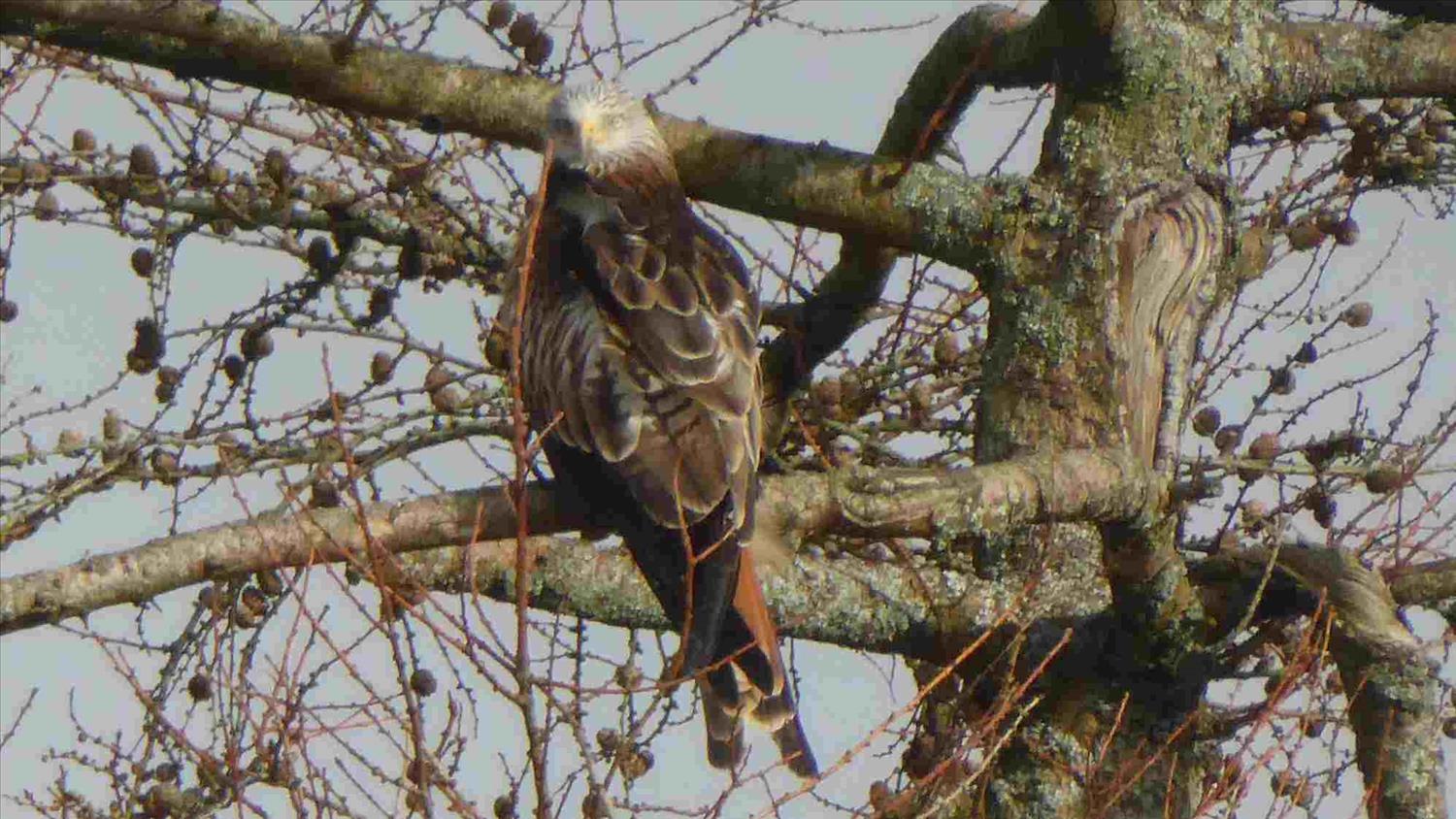 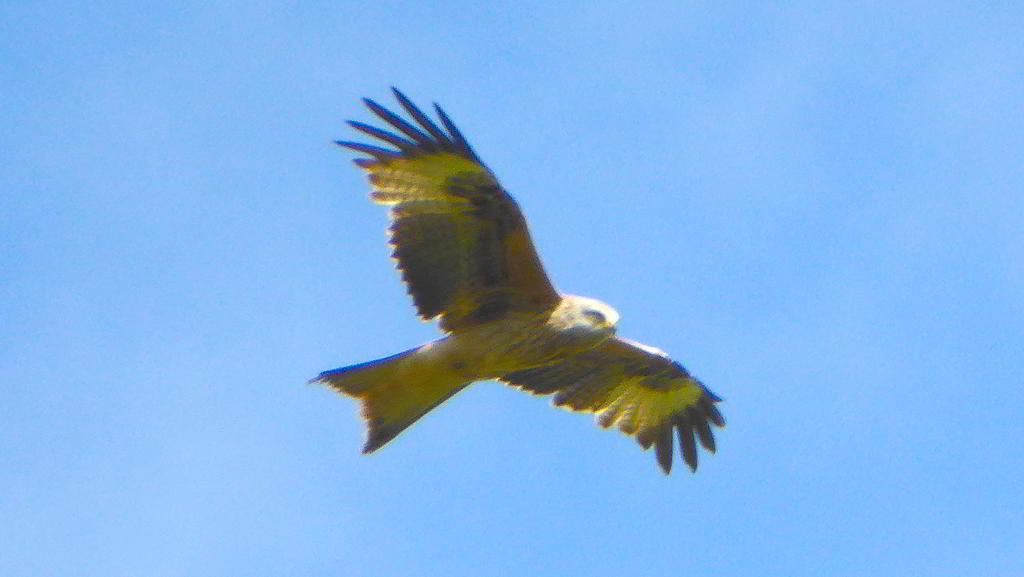 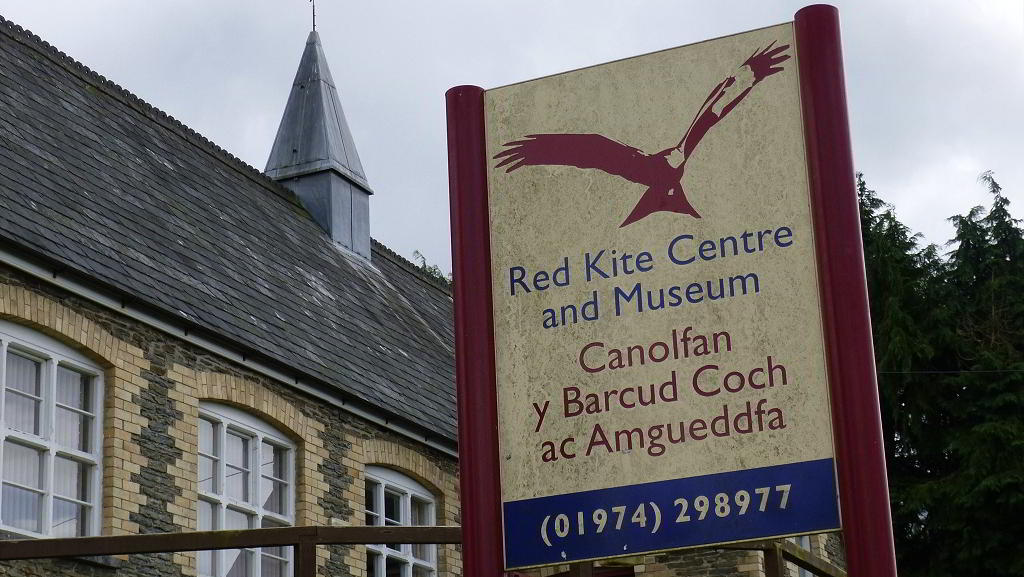 The birds you seeing soaring above Tan yr Allt are most likely to be Red Kites.  The Red Kite is a magnificent and colourful bird of prey with a wingspan that can be over 6ft.

The Red Kite came very near to extinction.

During the Middle Ages, the Red Kite was greatly valued as a scavenger, and helped to keep streets clean. It was protected by Royal Decree and killing a Red Kite attracted capital punishment!  In the 16th century, however, many birds of prey, including the Red Kite, had a bounties placed upon their heads and were persecuted as vermin. This continued into the 20th century and, as the Red Kite became rarer, it was also targeted by egg collectors and taxidermists.

By 1903, protection efforts began. It is thought that only two pairs of Red Kites survived in ancient oak woods in a remote upland valley in the Cambrian Mountains. DNA analysis has since shown that the entire current Welsh population is derived from a single female bird living at that time.

The 1950s brought further problems for the Red Kite, as the outbreak of rabbit myxomatosis devastated one of its main food supplies, at these same time as it suffered poor breeding rates, thought to have been the effect of organochlorine pesticides such as DDT.

The population was fewer than 20 breeding pairs until the 1960s when, through intense efforts of volunteers and the government, it began to slowly recover. By the mid 1990s , there were more than 100 breeding pairs,  and by 2003 that had increased to 350-400 pairs. Now there are more than 1,000 pairs of Red Kites in Wales.

At Tan yr Allt you do not normally have to wait very long before seeing seeing Red Kites in the skies.

Visit the Red Kite Centre and Museum in Tregaron. It is free, and there is free parking as well.  There you can see the original Victorian School room, enjoy a cup of tea with homemade Welsh cakes,  and watch a very interesting video about the protection and preservation of the Red Kite in Wales, with narration by Iolo Williams. 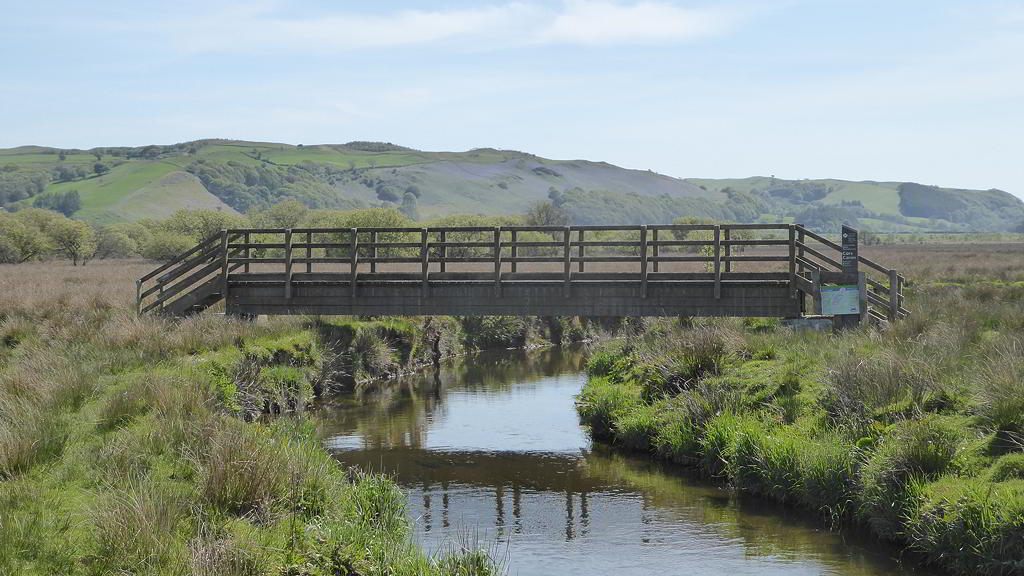 Just a few miles to the north is Cors Caron National Nature Reserve, an important raised peat bog covering 2,000 acres. It's a perfect place for walking dogs and seeing wildlife, including otters and 170 species of birds including Red Kites, Peregrine Falcons and Hen Harriers.

Nearby attractions include the Dolaucothi Gold Mines (National Trust), The Llanerchaeron Estate built by John Nash (National Trust), Strata Florida, the site of a 12th-century Cistercian Abbey (CADW), the Gwenffrwd Dinas Nature Reserve (RSPB), and the isolated chapel at Soar-y-Mynydd, which is said to be the remotest chapel in Wales. 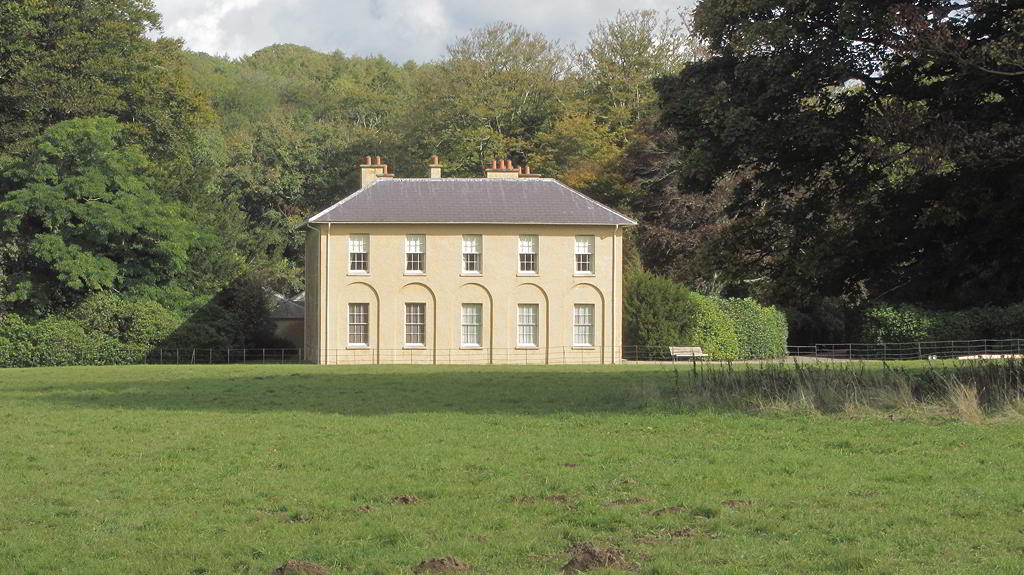 The estate's elegant Georgian house is  grade I listed mansion, and was designed and built in the Palladian style by John Nash in 1790.

The estate grounds include a walled garden with  51 varieties of apple trees and an ornamental lake.

Only guide dogs are allowed on the estate, but dogs on leads are welcome in the surrounding woodland and parkland walks. 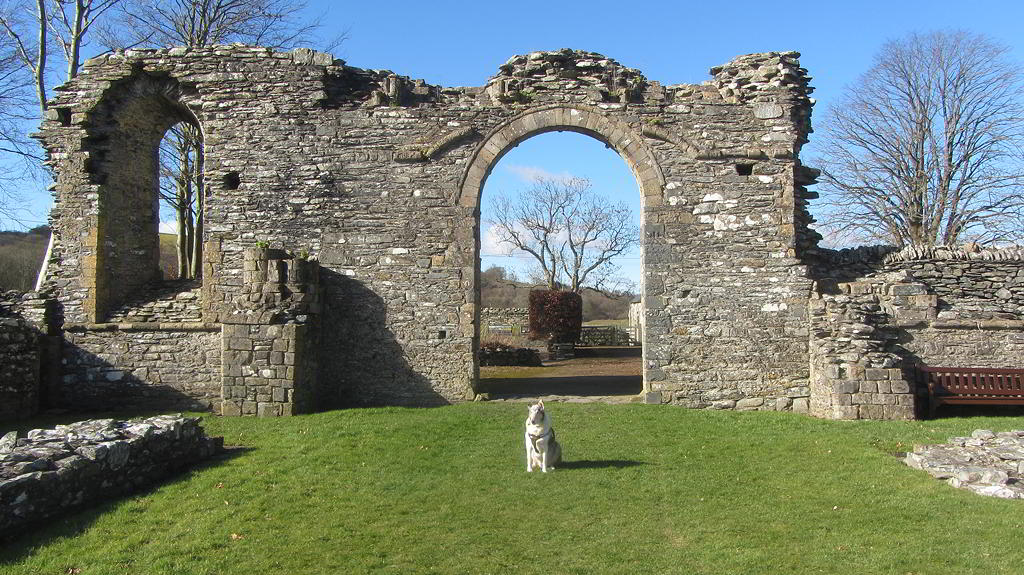 Strata Florida Abbey (CADW) is the site of a 12th century Cistercian Abbey where generations of Welsh princes are buried.  As an important and powerful religious site, it was the centre of cultural and political life in medieval Wales.

After the dissolution of the monasteries in the 16th century, it  was partly dismantled and gradually allowed to fall into ruin.

The Strata Florida Project Trust is researching the site and the conversion of a former working farm, Great Abbey Farm, situated next to the Abby ruins. The intention is to create a multi-functional centre.

Dogs on leads are welcome. 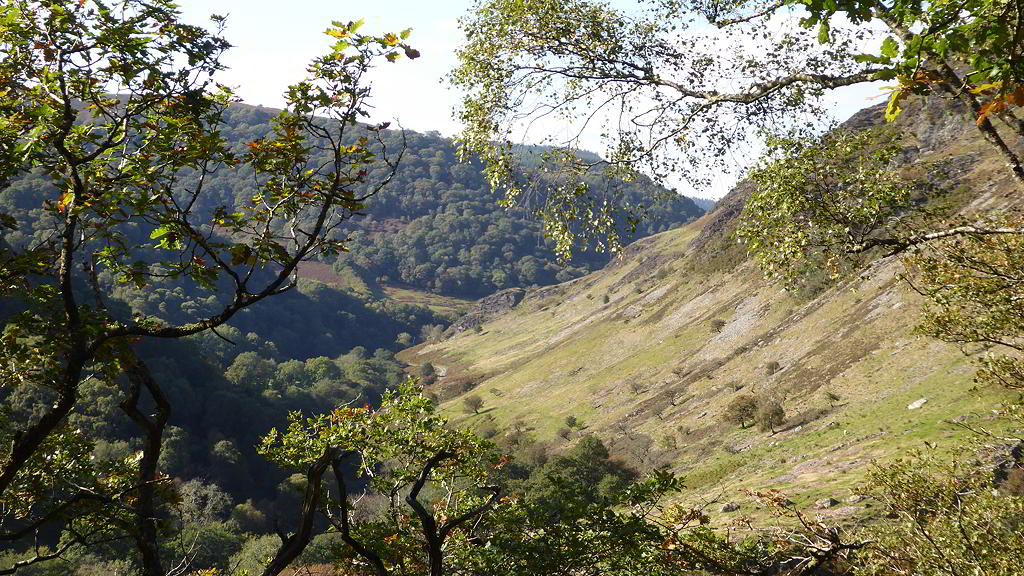 There is a circular walk through alder and oak woods, along the fast-flowing river.  Lichens and bryophytes cover the ground, boulders, and trunks and branches of all the trees with a layer of green.  In May, the woodlands have a carpet of bluebells. In autumn, the changing colours of the leaves set the hillsides ablaze

Dogs on leads are welcome.

Soar-y-Mynydd in one of the best examples of a Welsh Calvinistic Methodist Chapel. It was built in 1822 and is said to be the most remote chapel in Wales.  It's located about 10 miles east of Tregaron in a lonely valley in the uplands of  the Cambrian Mountains.

The US president Jimmy Carter visited this little chapel in 1986 and upon seeing it was quoted as having said that he had never seen anything like it in all his life, describing the place as the Green Desert.

During the summer, there are often 2pm Sunday services to which visitors are welcome. 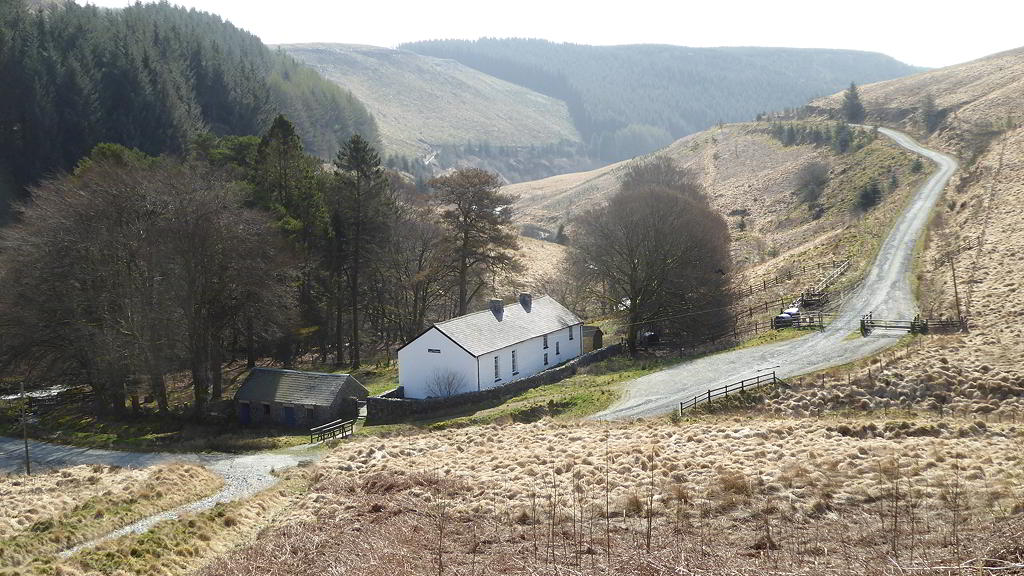 At the Dolaucothi Gold Mines,  you can pan for gold, see exhibits and displays of Victorian mining equipment, and walk along a miner’s trail that takes you past a Roman mine shaft.  From March through November, there are underground tours of the gold mines.

There are seven different walking trails, ranging in length from 1 mile to 4.4 miles. 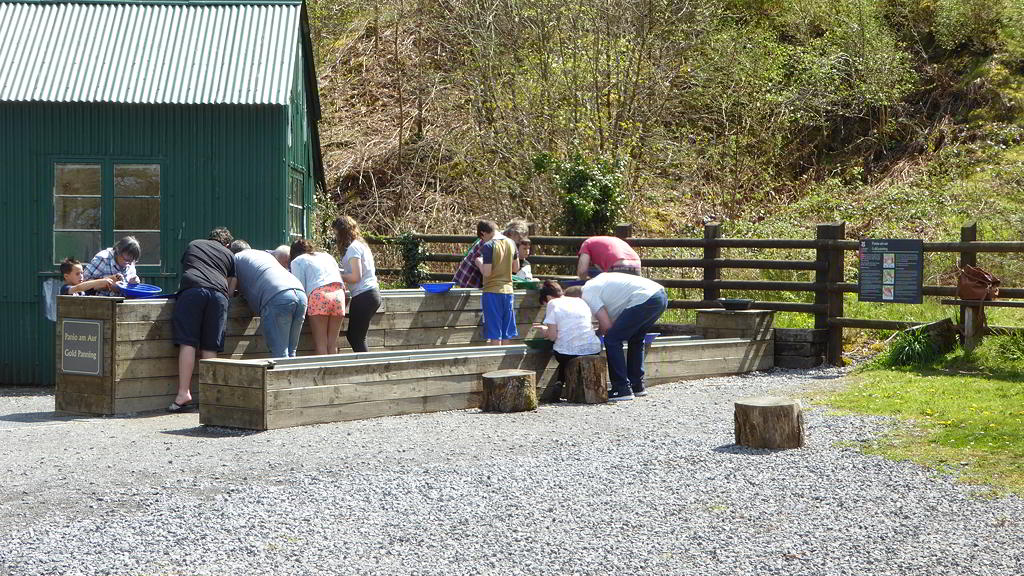 Tan yr Allt is one mile from the centre of Tregaron.  From the market square in Tregaron, take the road sign posted for Soar-y-Mynydd and Abergwesyn.  After 1 mile, turn right just before the sign post for Abergwesyn (Mountain Road).  Tan yr Allt is the first property on the right. 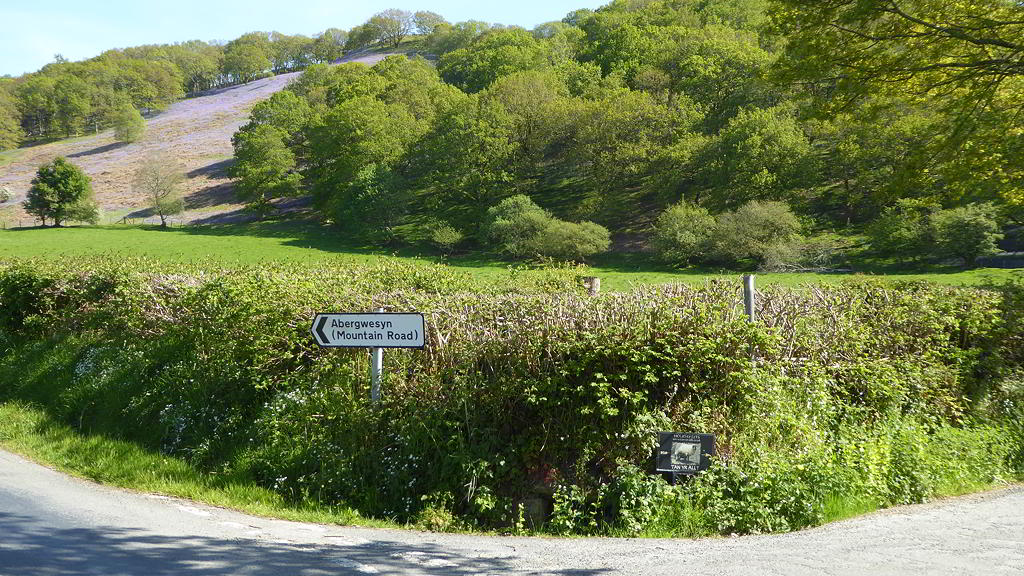